Entertainment News Today, May 4: Actor Alia Bhatt stood by Ranbir Kapoor and his grieving family as they performed the final rituals after Rishi Kapoor‘s demise on Sunday. A photo of both Alia and Ayan walking alongside Ranbir from Banganga where they immersed the late actor’s ashes has emerged online. Ranbir can be seen wearing a white shirt and a pair of blue denim while Alia is seen in a simple white suit and Ayan in a white T-shirt and denim. All of them also wore masks as a precautionary measure to protect themselves from COVID-19. Also Read – Ranbir Kapoor-Alia Bhatt Trolled After Rishi Kapoor’s Funeral by Some Uninformed People, Here’s Why 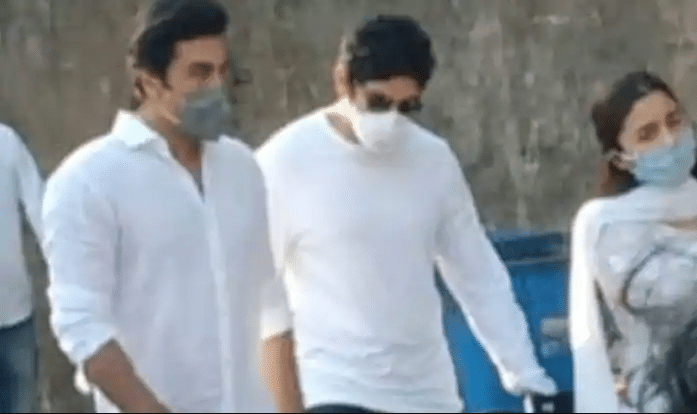 Rishi’s brother Randhir Kapoor talked to Times of India and revealed that they visited Banganga on Sunday to do the final Rasam Pagri Puja which is considered an important post-death ritual. “The Rasam Pagri Puja was held on Saturday. Yesterday, his ashes were immersed in Banganga, followed by a quiet prayer service with family at his home,” he said. Earlier, in an interview with Indian Express, Randhir said there were only six people at Rishi’s prayer-meet at his residence including him, Neetu and Ranbir. The people seen in a viral video recorded at the Puja on Sunday are Ranbir, Neetu, Riddhima, Alia and Ayan. Also Read – Alia Bhatt Shares Ranbir Kapoor’s Childhood Photo While Giving Tribute to Rishi Kapoor, Writes ‘Love I Received From You is a Warm Hug’

Randhir also revealed that they wanted to immerse Rishi’s ashes in Haridwar using their private jet but they couldn’t get permission to fly there due to the ongoing lockdown situation. The veteran actor said, “The prayer meet was held last evening. Riddhima was also there and so was I. In total, six family members were present. We wanted to get a private jet to go to Haridwar but didn’t get the permission, so we immersed his ashes in Banganga today.” Also Read – Rishi Kapoor’s Funeral Pics: Alia Bhatt Consoles Grieving Neetu Kapoor, Kareena-Saif Also Attend

Alia has been strong support for the entire family in these difficult times. She was also present at the funeral on Thursday and consoled a devastated Neetu Kapoor with other members of the family. Alia made sure that Rishi’s daughter, Riddhima Kapoor Sahni, who couldn’t attend the funeral due to travel restrictions, did the last darshan of her father through video conferencing. She, who too appeared broken down after the news of demise, held her phone for Riddhima and FaceTimed her during the funeral.

Rishi Kapoor passed away on Thursday, April 30 at Mumbai’s Sir HN Reliance Foundation Hospital after battling a relapse of cancer. The veteran actor was 67 when he dies and as revealed in the official statement by the family, he kept a jovial face and entertained the hospital staff and the doctors until his last breath.