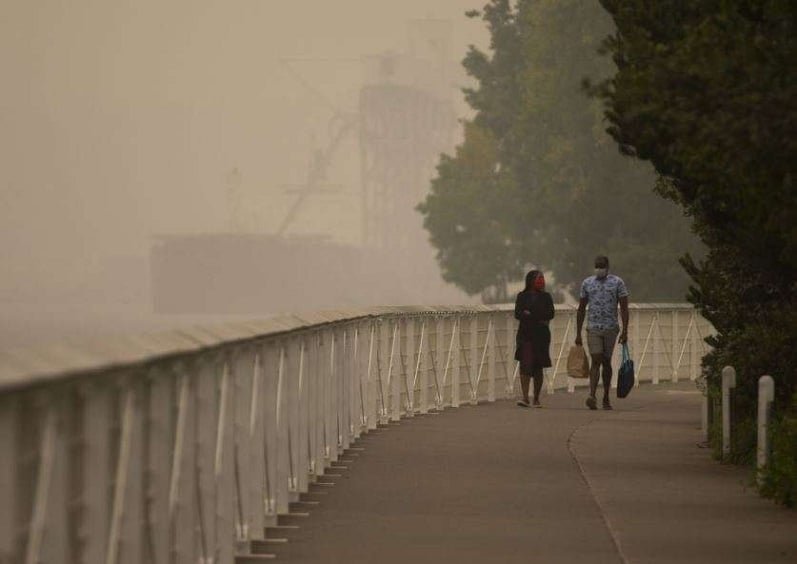 The cocktail of Covid and pollution in Delhi is making Delhi people more sick. Kovid is suffocating people due to infection and pollution. Everyone is having a dry cough (health problems due to pollution). Doctors themselves are unable to understand whether the cough is due to Kovid or due to pollution. The number of respiratory and cough patients in hospitals is increasing by 4 to 5 times. Doctors say that the level at which there is pollution at this time (bad air quality), if one breathes throughout the day, then one is smoking 30 cigarettes without smoking cigarettes.

Dr. Sanjeev Nair of the Respiratory Department of BLK Super Specialty Hospital said that the situation is very bad. There is a long line of patients since morning. Patients with throat pain, throat swelling, dry cough, watery eyes, difficulty in breathing are coming. The condition of the elderly is very bad. Now only people have to stay indoors. If you want to save your life, forget the festival and stay at home. If you come out, then the risk of Kovid and poisonous air is ready to do the disease.

Burning in eyes, suffocating breath .. Today, poison crosses 400 in the air, the bad condition of Delhi-NCR

Cardiologist of the Manipal Hospital, Dr. Yugal Kishore Mishra said that the patients with lung and heart had increased after the relaxation of lockdown. These were patients who were already ill, but were not reaching the hospital for treatment due to fear of Kovid. Now such patients are coming for treatment, due to which the number of such patients has increased. Whatever studies have been done, it became clear that due to Kovid, the heart is being affected, which increases the risk of coronary heart disease. Similarly, fibrosis is being created in the langs due to Kovid. It is so dangerous that spoils the langs completely. Two such patients in the country have had to undergo lung transplant. At the same time, a large section of the hospitalized patients are the sick ones due to pollution. Those who already have a problem with langs, their problems have increased considerably.

Now only people have to stay indoors. If you want to save your life, forget the festival and stay at home. If you come out, then the risk of Kovid and poisonous air is ready to do the disease.

Regarding the double attack of Kovid and pollution, Lung Cancer Expert Doctor Shubham Garg of Fortis Hospital told that the level of PM 2.5 in Delhi is at present. It is 10 times more than the normal. PM2.5 particles are carcinogenic, meaning they can cause cancer. Not only this, at the level of pollution, if someone breathes throughout the day, then he is smoking 30 cigarettes without smoking. Apart from this, if the person breathing in this air becomes kovid, then such people may need more oxygen during treatment. They may need to be kept on ventilator for longer. They may require longer ICU beds.

Dr. Viveka Kumar, a cardiologist at Max Hospital, said that smog contains many chemicals besides fog and smoke, which are harmful to health. Due to fog, these chemicals freeze just above the ground. If these particles reach the throat through the breath, then there is difficulty in breathing and cough starts. This affects the entire track, causing bronchitis attacks. Chemical particles hidden in the smog further increase the risk of asthma attack. Due to this, the capacity of lungs may also be reduced.

If one breathes throughout the day at the level of pollution, then one is smoking 30 cigarettes without smoking a cigarette.

Eyes are getting sick due to pollution
Delhi’s air is not only dangerous for the langs and the heart, but it is also affecting the eyes. Out of the house, eyes start burning in 5 minutes. Dr. Sanjay Chaudhary of Eye Seven said that pollution is affecting the eyes the most. Smoke from the vehicles is the most dangerous. Carbon monoxide, nitroxide, has a bad effect on the eyes. Factory-released sulfur worsens the eyes. Whenever PM2.5 is low in Delhi, then people start having eye trouble along with respiratory problems. In this case, the best cure is to execute rescue.

What are the symptoms: Eye irritation, itching, difficulty in seeing in the light, viscosity in the eyes, mud, swelling of the eyelids and dryness in the eyes.