HARARE: The lady, Violet Manuel, left her uncle’s funeral and ran for getting water. She was joined by dozens of people who were also after getting their daily ration oif drinking water in Chitungwiza, a densely populated town in Zimbabwe. 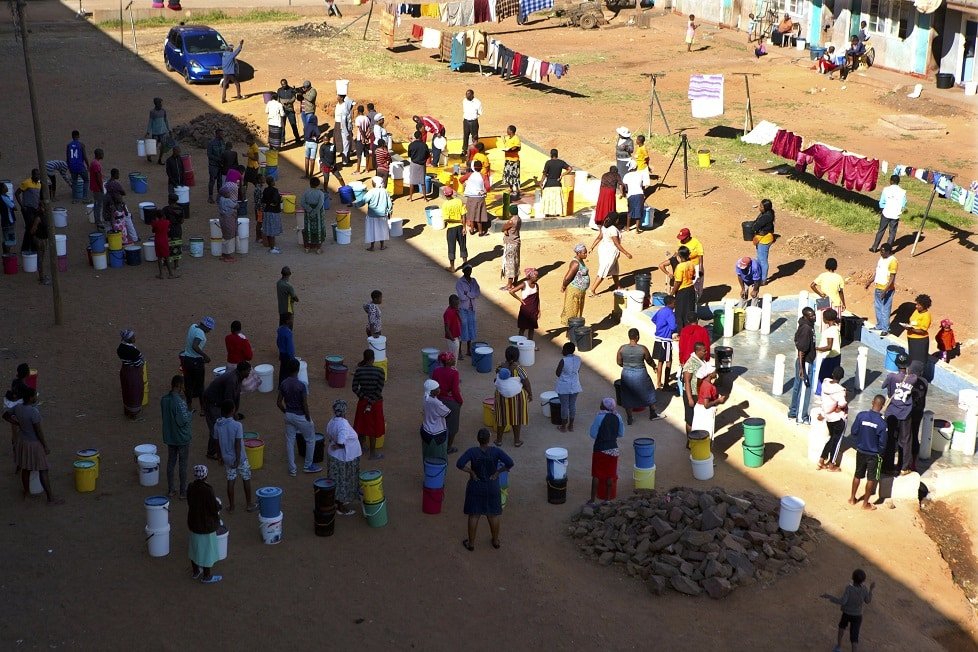 Nobody here is worried about maintaining social distancing while collecting their drinking water. But all of them are worried about contacting the novel corona virus infection.

They are all happy about having the water but they also fear getting the dreaded disease. Water is needed here for cleaning dishes and flushing the toilet, instead of washing hands.

This marks the increasing chances of corona virus infection spreading in slums of dense towns. It includes camps and crowded settlements also. Here the clean water is scarce and getting enough water is a daily struggle.

From indigenous communities in Brazil to war destroyed villages in the Northern Yemen, about three billion people have no water to wash their hands with. The use of soap is unheard of. It has been reported by charity group of WaterAid. This organization is afraid of the global funding being rushed to finding of Corona vaccine and its treatment, instead of any real commitment to its prevention.

It is not easy to link COVID-19 cases to water crisis. It needs deeper investigations. It is reported by the UNICEF’s water and sanitation team. They say, “What we know that without water, the risk of corona infection increases.”

About 74 million people in the Arab region alone do not have access to basic habd washing facility, as per the United Nations.

Syria’s water infrastructure has been damaged by a civil war that went over a decade. Millions of people are resorting to alternative measures. Idlib, the last rebel held territory, where the most recent military operations displaced nearly one million people do have very scarce water resources.

A gentleman at Idlib informed that he has doubled the amount of water he buys to keep his family clean and free from the coronavirus infection. He and his wife have cut down their expenses on clothes and food, to be able to purchase the extra water, since both of them have lost their jobs.

Yemen has seen five million displaced people because of the decade old civil war. They do not have water. They are afraid that all of their primitive sources of water such as wells etc are heavily contaminated.

Brazil, Manaus, has 300 families of poor indigenous communities have water only for three days a week and that is too from a dirty well.

A 27 years old, mother of two children says thar water is like gold there. The depend on donation of hand sanitizers to wash their hands. Most of the residents have fallen ill with symptoms of COVID-19 infections there in the past month.

Africa is witnessing about 100,000 virus cases so far. More than half the community of 1,3 billion people must leave their homes to get water. It has been reported by the Afrobarometer Research group.

Water is made available here by trucks or through wells. The long long lines of the crows standing there to collect water is easy victim of potential coronavirus infection community spread. It is said by Maxwell Samaila, the program manager of aid group Mercy Cops in Nigeria.

The rural areas of Sub Saharan Africa, most of the people have to travel for three hours to get water. More than 200 people touch the handle of the well one after another there. The hygiene part is nowhere to be seen, says Bram Riems, an adviser on water, sanitation and hygiene with Action Against Hunger.

Harare, the capital of Zimbabwe, has open areas of filthy apartment blocks, where women in orange T Shirts ticked off names of people fetching water from  arrow of communal taps that is provided in poor suburbs by Doctors without Borders. Many of the water supplying services in the country has collapsed along with the economy of the country.

A hygiene promotion officer did report that training sessions waere organized before the outbreak of this pandemic in that area. Here the water distribution points did not become the epicentre of contagion in Zimbabwe.

The buckets were spaced neatly one meter apart, but their owners huddled together. They were chatting together and exchanging cigarettes. They were doing high fives while they waited for the water.

No one was listening when a man shouted about maintaining social distancing. A bucket to wash hands was there but no one was using it.

The groups are placing soaps, mirrors at makeshift water sources to encourage hand washing but all is in vain. They hoped that people would at least look at their own images in the mirror and wash their hands.

About 70% of the people in Africa are very concerned about corona virus. But the investment in water and hygiene is precariously low.

Not more than six out of 51 major announcements made for giving financial support from donor agencies have included any mention of hygiene. Africa alone needs an investment of $22 billion. But the investment made by the African governments and the external financiers currently is hovering between $8 billion to $10 billion.

Many are of the opinion that this type of funding may claim huge human costs in time to come. People who are not able to wash their hands become easy victim of corona virus.