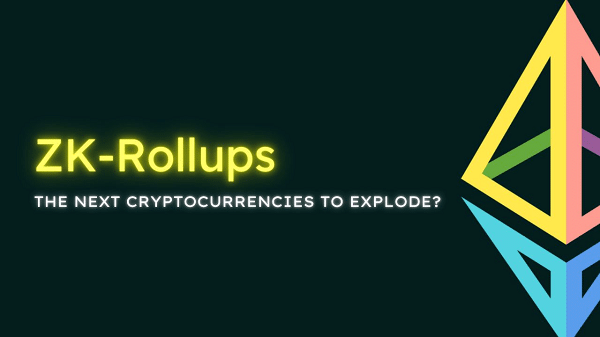 Ethereum blockchain is one of the most popular cryptocurrencies. But over the years, scaling on this service has become difficult to achieve. To solve this and some other problems, the developers decided to create second-level networks with the blockchain.

The program speeds up transactions and reduces commission costs. ZK-Rollups combines many transaction transfers into one package. For passing of the package you need to pay a commission, as for one action. The payment is divided between all users who transferred transactions in the package. This a good cost saving.

ZK-Rollups competes with another technology Optimistic Rollups and is still inferior to it in terms of compatibility. In general, developers spend a lot of money on ZK-Rollups to make it a communicative basis between Ethereum and second-tier networks.

Let’s look at a few more popular sites designed to improve the work of Ethereum.

This token is focused on creating business infrastructure and fast payments. The platform has many advantages:

The creators of the blockchain consider it the easiest. This is the very idea of the developers. Mina takes up a fixed amount of memory like a small text file. It’s only 22 KB. For example, the volume of Bitcoin from July 2020 to July 2021 increased from 230 to 345 GB.

The start of the blockchain can hardly be called successful. MINA is one of the most popular  cryptocurrencies https://www.aax.com/en-US/top-cryptocurrencies/ today. Beginning with $8 in June 2020, by July of the following year, the Mina coin was worth only $1. But the users believe cooperation with Ethereum will increase the chances to succeed in the future.

Blockchain is considered one of the best second-tier solutions for NFT on Ethereum. Users can benefit from instant trading and zero gas fees without losing security. Now IMX remains a popular blockchain, despite the temporary decline in cost. Moreover, traders consider this situation the most promising for investment, referring to the fact that the real value of the token is much higher than it is now.

Immutable X has a good set of tools to simplify programming and create Dapps. Blockchain uses the same programming language as Ethereum.

This cryptocurrency is a decentralized protocol based on Ethereum, allowing you to exchange coins automatically. In the network, users trade with each other with low transaction costs.

The ability to trade currencies from the own wallet saves the user from worrying about the honesty and security of the exchange. The decentralized nature of trading is based on the fact that the coins remain in the wallet until they are sold. Funds are not transferred to a third party.

The token was developed according to the Ethereum ERC-20 standard for the creation of certificates of deposit (DC). HEX is the first blockchain to have a chart of future supply. This allows the user to predict large rates and plan investments.

HEX TruthEngine stimulates users to announce the terms of storage of funds on the blockchain. In case of violation of the obligations, the user is fined in favor of those who kept their word.