Skip to content
Contents hide
1 Walking Around With the Tail Up
2 Rubbing Against Ankles or Face
3 Kneading
4 Noises
5 Curling Up to Nap
6 Grooming
Please follow and like us: 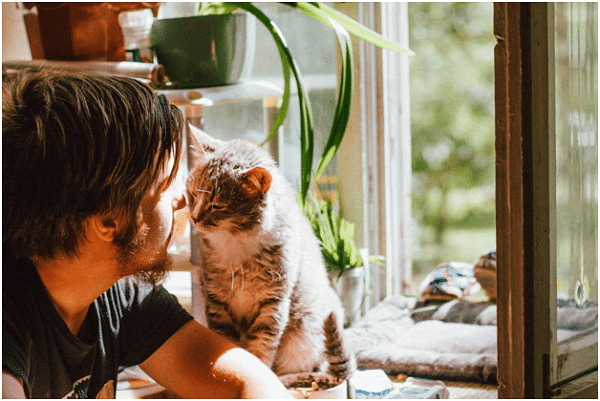 Dogs show their affection with kisses, wagging tails, and more. Cats don’t. It can be hard to notice the signs of affection from cats without being aware of what they do to show their love. They aren’t as obvious as dogs, but they do show affection to their owners and have a variety of actions that can be a way to show just how much they love someone. If you’re wondering if your cat really loves you, look for the following.

Walking Around With the Tail Up

Of course, it’s adorable watching a kitten or cat wander around the house with a cute cat collar, tail straight in the air, except for a bent tip. This isn’t just how they walk, though. Cats typically walk with their tail down. Having the tail up, except for the little piece at the top, is a sign of affection in cats. If they walk into the room this way when you get home from work, it’s a sign they’re happy to see you.

Rubbing Against Ankles or Face

Headbutting can get a little annoying, as can rubbing against your ankles when you walk from room to room. Don’t get upset about it, though. They’re not doing this to bug you. They’re doing it to prove you belong to them. When they rub against you, they release pheromones. These pheromones tell other cats that you belong to your cat, no one else. It’s a sign of love and affection because they don’t want to share you.

When kittens are first born, they make a kneading motion with their paws when they’re feeding. It looks just like they’re kneading the dough for bread, though they’re doing it on the mom cat instead. For some cats, this never goes away. They may knead on you or on your blankets and pillows. Kneading on you is a way of showing affection and comfort. They won’t be kneading if they aren’t comfortable.

Curling Up to Nap

Working from home, many people noticed how frequently their cat started to curl upon them to take a nap. It might not have been at a convenient time, like during a meeting, but it happened more frequently. Cats were happy their owners were home and spending more time with them. Curling up for a nap is a sign of trust and shows they’re comfortable enough to relax and sleep around you. It may be hard to get up when they’re napping, but this is a huge sign of affection from them.

Cats tend to groom each other the way their mom groomed them when they were tiny kittens. They learned this behavior not only as a way to keep clean but a way to show affection, as well. Their tongues may feel a little bit like sandpaper since they are rough, but grooming shouldn’t hurt at all. When a cat is grooming you, they’re trying to take care of you. This is one way they show affection since they want to make sure you are clean and healthy because they love you.

The ways a cat will show affection may not be as apparent as with dogs, but they are there. Watch how your cat acts when you’re home to see if you notice any of the above signs. If so, they’re a sign that your cat does love you, even if they don’t always want to play or like to spend time on their own. The myth that cats aren’t affectionate is not true if you watch them for a little bit. They show plenty of affection when they get close to you, and it’s just important to learn the signs so you can see just how much they love you.