President Donald Trump has assured the Americans that the United States of America will reopen, whether there is a corona virus vaccine or not, as the country has suffered badly because of the corona virus pandemic. 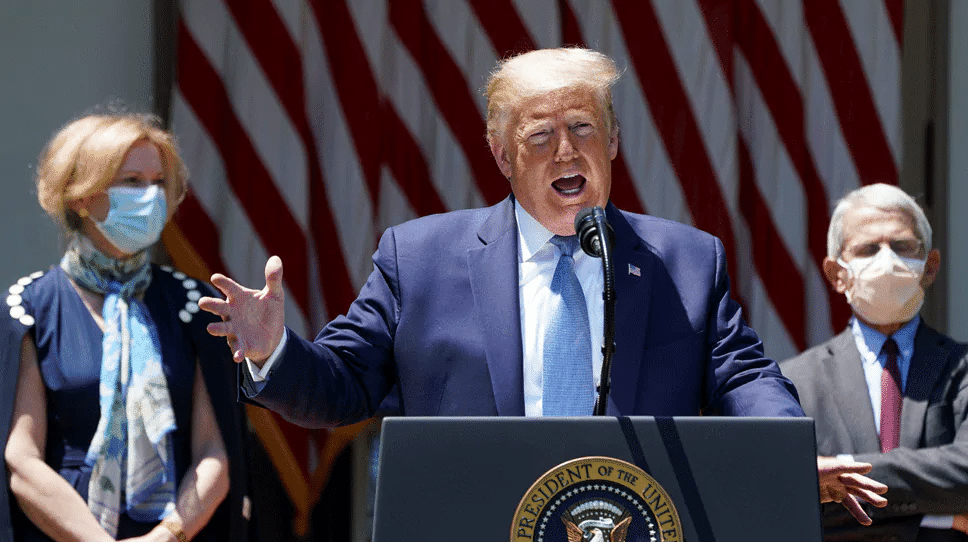 President Donald trump was addressing a News conference on Friday, May 15th at the Rose Garden, White House. He said “Americans to return to their lives as normal.”

“As of this morning, almost every state has taken steps to begin reopening, and the American people are doing an extraordinary job of continuing to take precautions while, at the same time, wanting to start.  And they will be starting to resume their American way of life,’’ Trump said.

“And I just want to make something clear. It’s very important: Vaccine or no vaccine, we’re back.  And we’re starting the process.  And in many cases, they don’t have vaccines, and a virus or the flu comes, and you fight through it.  We haven’t seen anything like this in 100-and-some-odd years — 1917,’’ Trump added.

The US President also announced during his press meet that he had an objective to deliver a corona virus jab possibly by the year end.

“But you fight through it. And people sometimes, I guess – we don’t know exactly yet, but it looks like they become immune, or at least for a short while, and maybe for life.  But you fight through it.  But what we would like to do, if we can, is the vaccine.  I think we are going to be successful in doing it and hopefully by the end of the year,’’ he said.

The US President further said that the US Administration ”will be reigniting the economic engines and take care of the most vulnerable – the senior citizens and some others.’’

“We’re going to be working very, very hard on our senior citizens and our nursing homes and various communities to support those that are struggling in this very difficult time.  Others don’t have the same kind of struggle,’’ Trump told reporters.

Trump also announced to appoint MoncelSlaoui, the former head pf vaccines at GlaxoSmithKline and four star General Gustave Perna to lead the efforts as researchers around the world struggle to develop a vaccine for corona virus, that has claimed more than 300,000 lives across the world. Trump expressed hope that COVID-19 vaccine will be available by end of this year only.

Trump also formally announced “Operation Warp Speed”. It is to develop the Coronavirus vaccine as his administration mounted an unprecedented effort that involves the country’s military to get a vaccine for this deadly disease by the end of this year.

”Its objective is to finish developing and then to manufacture and distribute a proven coronavirus vaccine as fast as possible. Again, we would love to see if we could do it prior to the end of the year. I think we are going to have some very good results coming out very quickly,’’ Trump said.

He stressed that the United States is not looking at profits from the coronavirus vaccine. ”The last thing anybody is looking for is profit in terms of what we are doing. Every company they want to get it out,’’ Trump told reporters in the Rose Garden of the White House.

‘In addition, it will continue accelerating the development of diagnostics and breakthrough therapies. The great national project will bring together the best of American industry and innovation, the full resources of the United States government, and the excellence and precision of the United States military; we have a military totally involved,’’ he added.

This was confirmed by Trump that he would appoint MoncelSlaoui, the former head of vaccines in GSK, and the four star General Gustave Perna to head this Operation Warp Speed.

MoncelSlaoui left GSK in the year 2017. He will be the Chief scientist. MoncelSlaoui is an internationally reputed immunologist. He helped in creating 14 new vaccines in last ten years during his service tenure in the private sector pharma industry.

The Chief Operating Officer with MoncelSlaoui will be four-star General Gustave Perna. He is at present in charge of 190,000 service members, civilians, and contractors as commander of the US army Material command that means logistics. It was as declared by the US President.

Experts are preparing for this initiative and they are in throughout the American government. They are collaborating to evaluate approximately one hundred vaccines candidates from all over the world.

“They have identified 14 that they believe are the most promising, and they are working to narrow that list still further,” he said.