Georges Seurat, chiefly remembered as the pioneer of the art technique called Pointillism, was a French post-Impressionist artist. Although Seurat named this technique “Chromo-Luminarism,” the name “Pointillism” was coined by art critics to mock the artist, but it has since become the accepted label for the technique.

It is achieved by using tiny, distinct dots of color to form a softly flickering surface. It relies on the ability of the viewer’s eye and mind to merge the color spots into a blended range of tones. Seurat’s artistic personality and his ability to infuse quasi-scientific innovations about color and expression helped him create art that altered the course of modern art, birthing Neo-Impressionism.

He firmly believed great contemporary art should show contemporaneity in ways similar to classics, except that it would need technologically informed methods. This made Georges Seurat’s artworks some of the first to use such unconventional sources for expression.

His career was quickly launched to the forefront of the Parisian avant-garde, but this triumph was short-lived, seeing as he died after barely a decade of mature work at the young age of 31. However, his innovations remained highly influential, molding the work of diverse artists like Vincent Van Gogh, and some of his works, like Sunday Afternoon on the Island of La Grande Jatte, became widely popular icons.

Born in Paris on December 2, 1859, Georges Pierre Seurat was the youngest and third child of Antoine Chrysostome Seurat and Ernestine Faivre. His father, originally from Champagne, was a former legal practitioner who made money from speculating property, and his mother was a Parisienne with a wealthy family background. He and his two older siblings lived with their mother in Paris while their father, who lived in Le Raincy, visited once a week.

Seurat attended the École Municipale de Sculpture et Dessin, an art school run by the sculptor Justin Lequien. He first studied art before moving to École des Beaux-Arts in 1878, where he was tutored by Henri Lehmann, a follower of J.-A.-D. Ingres. He followed a routine academic training, drawing from casts of antique sculptures and copying the drawings of old masters and this helped him faster career development. This process is used by other modern colleges even in the 21st century.

Seurat found a book in the school library by a Genevan painter and engraver, Humbert de Superville, which strongly inspired him and later influenced his art. It was the Essai sur les signes inconditionnels de l’art (Essay on the Unmistakable Signs of Art). It dealt with the relationship between lines and images and the future course of aesthetics. Seurat was also taken with the work of David Sutter, who combined mathematics and musicology, as well as Michel-Eugène Chevreul, whose works introduced Seurat to color theories and optics. These formed the basis for Seurat’s strong interest in art’s intellectual and scientific practice.

In November 1879, at the age of 20, his formal education ended, and he left the École des Beaux-Arts for a year of military service in Brest, where he sketched other recruits and seascapes.

After a year at the Brest Military Academy, he returned to Paris, sharing a studio with his friend Aman-Jea. Over the next few years, Seurat devoted himself to mastering monochrome drawing. He also studied color theories and their effects on the human eye by paying close attention to the works of Eugène Delacroix.

These studies proved central to Seurat’s reasoning and practices as an artist.

In 1881, Seurat began to execute his theoretical studies in famous Georges Seurat artworks. It birthed his first major project—Une Baignade, Asnières (Bathers at Asnières)—a monumental piece portraying a group of young men relaxing by the Seine in a suburban part of Paris. It was based on several small oil sketches and figure studies. Its final rendition is an accomplished work depicting the atmosphere of summer. It was primarily done using a brushstroke technique known as Balayé and later re-done by Seurat with tiny dots of contrasting colors.

Seurat submitted Bathers at Asnières to the state-sponsored 1883 Paris Salon, only to have it rejected. As a result, he allied himself with other independent artists in Paris and formed the Societe des Artistes Independants. There he met and befriended Paul Signac, with whom he shared his innovative ideas about Pointillism, and Signac subsequently adopted the technique.

The Most Famous Artwork 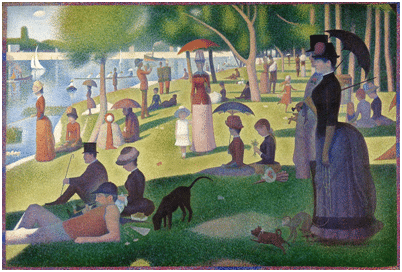 As he did with the Bathers painting, he later retouched La Grande Jatte using the Pointillism technique. La Grande Jatte debuted at the Eighth Impressionist Exhibition of 1886 and was positively received. The visual effects it created with flickering light and vibrant colors and its complex representation of social classes earned Seurat commendation from various quarters both at home and abroad. This established Seurat as the foreman of a new avant-garde.

Shortly before he died in 1891, Seurat spent the summer of 1890 on the coast at Gravelines, where he produced four canvases, eight oil panels, and a few drawings. The cause of his death is uncertain but has been attributed to an infectious disease. His last ambitious project, Le Cirque (The Circus), was left unfinished after his death. 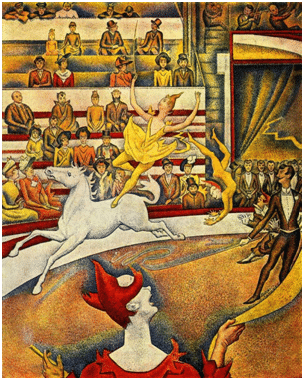 However brief his career was, Georges Seurat left behind an influential body of work that had a lasting impact on the art world. His methodical and devoted use of color theory and his technical innovations influenced several of his peers and many who came after him.