Skip to content
Contents hide
1 1. Attitude
2 2. There are three primary characters.
3 3. Mechanics on the road.
4 4. Missions for non-player characters.
5 Which game would be the best to play?
Please follow and like us: 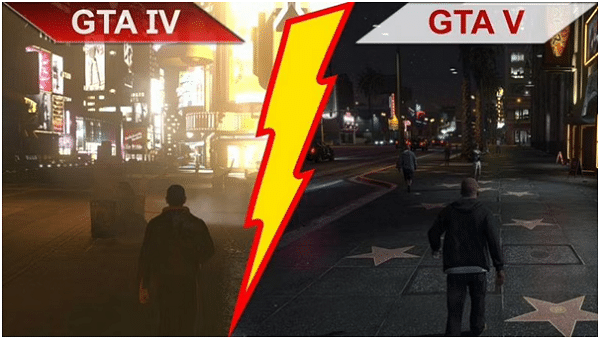 In the Grand Theft Auto series, GTA 4 and GTA 5 are the two most popular games, and there has been a long-running rivalry between the two games for quite some time. The darker and more in-depth storyline of Grand Theft Auto 4 is preferred by certain gamers, but others favor the lighter and more pleasant tones of Grand Theft Auto 5. Any time we want to compare different games, all we have to do is look at the most distinguishing features of each one.

Listed below are the most significant differences between GTA 4 and GTA 5:

The most significant difference between the two games is the absence of customizing choices in Grand Theft Auto 4. This is the one area where the game falls short, despite the fact that it is far superior to its predecessor in almost every aspect. GTA 5 is made more enjoyable by the player’s freedom to customize every aspect of the game. By viewing the game from this vantage point, users may create their own unique gaming experiences.

2. There are three primary characters.

Included in GTA 5’s story mode are three primary characters, which is a big change made by Rockstar Games in this iteration of the GTA series. In addition, they did a fantastic job of showing the backstories and battles that each of these men had to through. Certainly, Niko was a terrific main character, perhaps even more impressive than Michael, Trevor, or Franklin on his own, but the fact that the developers gave us the opportunity to change the character to another at any time, on the other hand, added a lot of new and interesting things to the very process of the game.

3. Mechanics on the road.

Many consider GTA 4 to be a huge improvement over its predecessor, GTA 5. When driving in a realistic way, you’re going to have a lot of little yet significant fender-benders and dings. Thanks to GTA 5, this feature has been enhanced and made a lot more enjoyable, however at the sacrifice of realism.

The inclusion of random NPC missions to the streets of Grand Theft Auto 5 is a big improvement to the overall gaming experience. In the event that a pedestrian begs for assistance while you are walking, you should pull over and react in the way of the Good Samaritan. While you’re still a criminal, at the very least, you’ve managed to apprehend a number of people who could have otherwise gotten away with their crimes. This is not the case with GTA 4, which does not have this function.

Which game would be the best to play?

Answering this question is contingent on the choices and expectations of the user. Who still wants to play Grand Theft Auto IV: San Andreas? Long-time fans of the Grand Theft Auto franchise who like to keep everything in the same manner. Those who have physical flaws that cause their eyes to pain and cause them to lose their “feeling of beauty.” It is not desirable for owners of “retirement” irons to be subjected to the regular revisions of the “five.”

Those who are new to the Grand Theft Auto franchise will like the game the most, as will those who have played the previous installments. For everyone who enjoys a good change. This game is intended for individuals who desire a gorgeous, high-quality visual while overlooking the flaws of the game’s physical moments.

We hope you found this article to be informative and entertaining. What additional distinctions do you think are significant? Please share your thoughts in the comments section!

P.S. If you want to buy GTA online account, please get in touch with us! Everything is fair, lucrative, and devoid of fraud in this world.