Eyewitnesses saw the Airbus A320 attempted to land a few times before it crashed in a residential area. This residential area is near the airport. About five to six houses and six to seven cars were destroyed in the crash. 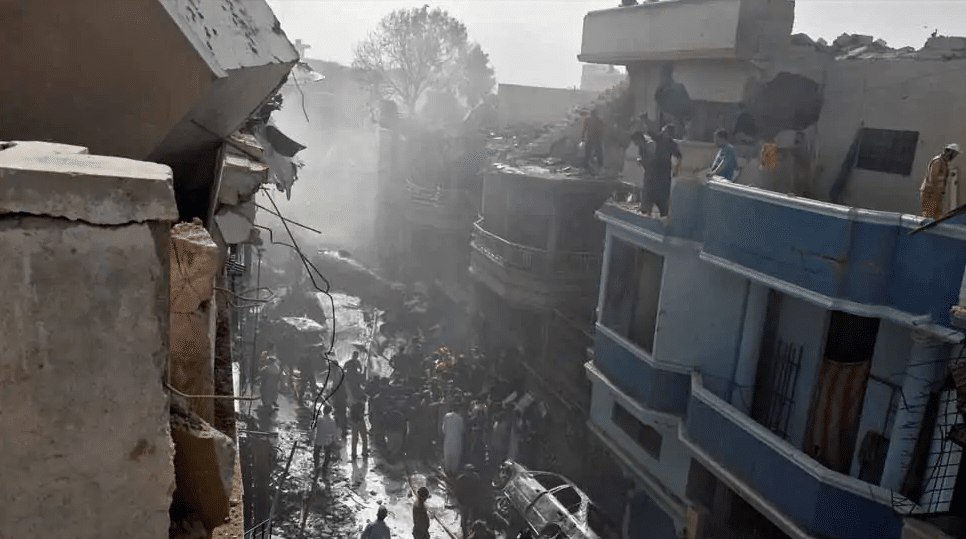 Karachi: The death toll from this Pakistan International Airlines plane crash has risen to 97 so far. Two survivors have been reported in the crash.

This flight, which was enroute from Lahore, crashed in the Model Colony of Karachi, near Jinnah International Airport during its attempts to land. This crash took place on Friday.

The Sindh Health Officials were quoted by the Pakistani news agency. These officials confirmed the deaths of 97 people. These were of the 99 people on board of the ill fated flight. It included 91 passengers and 8 crew members. The two survivors are reported to be in a stable condition.

As the reports say, the pilot of the airplane faced some technical difficulties with opening of the landing gear, while trying to land the plane in Karachi airport. He was communicating about a “technical difficulty” to the air traffic control. It was moments before the aircraft crashed near the runway.

As per the eyewitnesses, this aircraft attempted to land a few times before it crashed in a residential area near the airport. It destroyed about 5 to 6 houses and 6 to 7 cars in the crash.

A state of emergency was declared in all major hospitals in Karachi, immediately after the crash.

Pakistan Prime Minister Imran Khan offered his condolences. He tweeted, “Shocked & saddened by the PIA crash. Am in touch with PIA CEO Arshad Malik, who has left for Karachi & with the rescue & relief teams on ground as this is the priority right now. Immediate inquiry will be instituted. Prayers & condolences go to families of the deceased.”

The rescue operations are going on as the military personnel and rescue workers are trying to retrieve bodies and looking for survivors in the debris.