Skip to content
Contents hide
1 The Most Haunted House in Savannah
2 A Softer Paranormal Experience at the Juliette Gordon Low House
3 Friendly or Frightening Ghost Tours
Please follow and like us:

Savannah, Georgia, has one of the most profound and fascinating histories of any city in the United States. Savannah has tales from the days of pirates to being a battleground throughout many of the country’s most historical wars, including the Revolutionary War, the War of 1812, and the Civil War. Many believe these lost lives still linger on today, from soldiers losing their lives in battle to murder victims and more.

This Southern city’s history, both the good and bad, contributes to many paranormal claims and ghost tours. So, when you’re planning on checking out one of the Savannah haunted tours, what should you expect? Today, we’ll explore one of the most popular Savannah ghost tours and some of the iconic stops you’ll make along the way.

The Most Haunted House in Savannah

Many people say that the Owens-Thomas House is the most haunted building in Savannah. The Owens-Thomas House is considered to have more ghosts per square foot than any other location in the city. The home’s dark history is the main contributor to these potential hauntings. The last known owner of the home was Margaret Thomas. When she owned the house, she tended a garden that was supposed to be her passion. Today, people claim to still see her spirit tending to the garden and have nicknamed her the Lady in Gray. She’s the most commonly reported ghost on the premises.

However, there are many more. For example, tourists have reported that a museum tour guide was giving an evening tour when she heard a match strike and smelled burning tobacco. She searched the tour group for someone smoking, but no one was. Even the group agreed that they saw a flickering flame and a puff of smoke behind the tour guide, followed by the distinct smell of tobacco. In addition, another visitor to the house took several photos during the tour and discovered a face in the house’s window, several orbs floating outside, and an apparition of a small girl in a dirty blue dress. So, if you plan on touring this haunted house, prepare for some potentially eerie encounters.

A Softer Paranormal Experience at the Juliette Gordon Low House 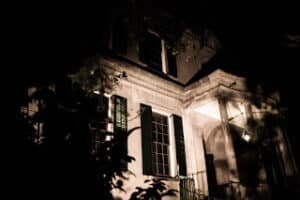 Juliette Gordon Low was the founder of the Girl Scouts of America. She was deeply passionate about giving back to girls, her community, and her country. But, remember, not all ghost stories are malicious or terrifying. Sometimes, such as the Juliette Gordon Low House case, they’re caring spirits that linger on. As the story of this house goes, Juliette’s mother, Nelly, passed away in the home after a long life. She had lost her husband many years before, and as her time drew nearer, she rested on her death bed surrounded by Juliette and her family. As her family began to cry over her soon-to-be passing, she reassured them that she was only going to reunite with her love.

At that moment, she sat up from the bed and reached her arms forward as if to embrace someone. Next, she lay back down and gently passed away. As Juliette turned to leave the room, she saw the door ajar, and her late father walked into the room before vanishing. Juliette raced down the stairs to tell her butler what had happened. However, he told her not to worry, as Nelly and her husband had just left the property arm in arm. Despite this story, many say her spirit lingers in the house, as people claim to see her looking out of the windows or sipping tea at the dining room table. So, if you want to see the paranormal without the typical malicious intent behind it, the Juliette Gordon Low House is an unforgettable tour.

Savannah’s rich history has produced countless paranormal claims. So, whether you’re looking for a terrifying ghost adventure or to admire the friendlier side of the supernatural, Savannah has it all.