Children are a gift from God, and they are a blessing in a number of ways. The best thing about children and their childhood is probably their innocence which is probably the result of their simplicity and purity.

Such innocence is always tough to capture on a canvas and at the same time one of the top choices for artists around the world to paint. Throughout the years or better call it centuries, painters from every nook and corner of the world have tried their hands on painting children – however, only a few have been successful.

Let’s have a look at some of the most famous paintings of children – those that have justifiably portrayed the innocence and beauty of children. If you are an art lover who loves children in art, read forward. 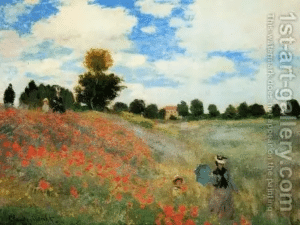 Poppies at Argenteuil was painted by Claude Oscar Monet in 1873 and portrays a pleasant landscape of a poppy field at Argenteuil, Paris. The painting presents four people, including Monet’s wife and his son, strolling through the poppy field.

Claude Oscar Monet is one of the most famous painters of the Impressionist era and was a master in capturing the optical effects of sunlight, using colours. As in this particular painting, colours appear to be the main feature. The red hues dominate most parts of the paintings that absolutely justify its title.

Interpreting the painting, a woman and the child walk through the thick grass in the foreground, while another woman and child appear at the top of the field. And, although it looks like a fine day, there is some cloud that hinders the sun. All in all, the painting looks very ordinary yet very pleasant. 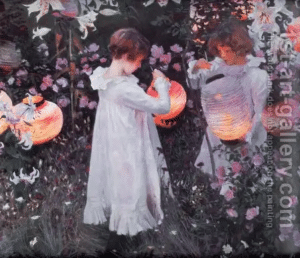 Carnation, Lily, Lily, Rose, a masterpiece by John Singer Sargent is a beautiful depiction of a former English village of Broadway that had once been a major stopping point for horses. The painting takes its title from a very popular song by composer Joseph Mazzinghi.

The inspiration for this magnificent picture comes from Sargent’s boat expedition on the River Thames. During the boat trip, Sargent saw a group of children among flowers holding Chinese lanterns. Similar to what the artist saw, the piece shows two young children dressed in all white, and surrounded by flowers and bushes. Also, they hold Chinese lanterns in their hands, as the day is slowly turning into night.

It is said that the artist took a long time to finally craft the painting. That is because he got very few moments in between the day and sunset to understand the light effect. The masterpiece was displayed for the first time at the Royal Academy summer exhibition and is still in the Tate Britain.

Vincent Van Gogh created First Steps (after Millet) at the end of 1890 when he was a patient at the asylum. The painting is inspired by Jean Francois Millet’s crayon drawing of the same title made in 1858.

The painting is assumed to be very dear to the artist, as his brother was recently married and expecting a child. The painting shows a father who just stopped his farm work to get a glimpse of his child’s first steps with his arms wide open, while her mother, being the protective one, holds her from tumbling onto the ground. 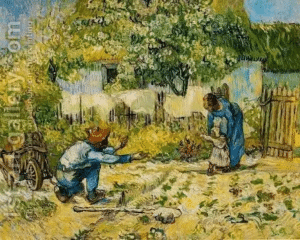 Van Gogh improvised Millet’s version of First Steps. He added a beautiful and suave colour pallet to the canvas. He painted the bottom half yellow with hues of green, and the top with green flora. He used the same blue colour for the sky and the house behind the tree. 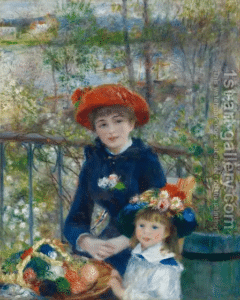 Painted by a French art genius and one of the leaders in the development of Impressionist style, Two Sisters portrays the radiance of two young women on a bright and beautiful day.

The painting shows two sisters on the top terrace of Restaurant Fournaise in a village nearby Seine, Paris. It is the same restaurant that Renoir painted in the Luncheon of the Boating Party, and can often be viewed in many of his other works.

In the painting, Renoir has beautifully captured the beautiful facial expression and the youthful complexion of the elder subject. Similarly, coming to the young little child, her innocence and the assurance of being with her sister can be perfectly viewed in her eyes. And, the perfection to do that is what defines an artist. 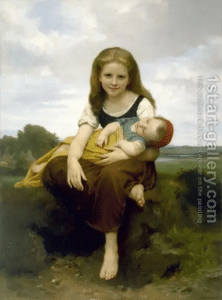 At first glance, the painting will look absolutely like a photograph. Thanks to its realistic painting style – the clouds, the grass, the shrubs, and rock in the background, all look absolutely real. Also, the technical ability of Bouguereau to paint such a painting is well praiseworthy.

Painted by French academic artist William-Adolphe Bouguereau, The Elder Sister or La Soeur Aînée features a beautiful young girl sitting on a rock holding a baby on her lap.

The girl in the picture looks directly at the viewer, with elegance and innocence. That combined with the little kid peacefully taking a nap in his sister’s lap, gives the painting a feeling of tranquillity.

To sum up, these are some of the most famous paintings of children. These paintings showcase the innocence of a child with absolute perfection and thus deserve a place in your collection.