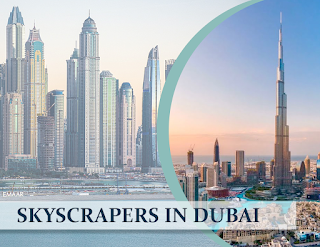 Dubai is the largest city in the United Arab Emirates, known as one of the skyscraper cities and home to the world’s tallest building. Dubai drives its economy with tourism, real estate, tech, shipping, and financial services. The city is much more than just a multi-layered land with a vision, but the city has been endowed with countless architectural wonders and aesthetic skyscrapers. Dubai skyscrapers amaze visitors with their shocking architectural solutions, and guests have the opportunity to catch a glance at astonishing vistas.

Dubai skyscrapers’ architectural layout has been modified from traditional styles influenced by culture, desert panorama, and lifestyle to modernist style. Skyscrapers in Dubai are clustered mainly in three districts: Downtown, Dubai Marina and Business Bay. Today, we will reveal some of the tallest buildings in Dubai that contribute to the magnificence and grandness of the cityscape, with some introductory details about each skyscraper. 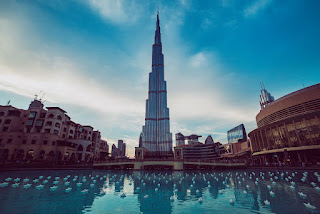 If you’re planning a trip to Dubai, you must add Burj Khalifa to your bucket list, often referred to as Khalifa Burj Dubai. Are you wondering what Burj Khalifa is? The Burj Khalifa is the tallest building globally, listed as one of the world’s most top-tier and highly coveted residential places. The Burj Khalifa is an iconic needle-shaped building that reconceives the term loftiest, three times as tall as the internationally renowned Eiffel Tower in Paris. Besides its title of the tallest towers in Dubai, it also holds the records for tallest free-standing structure, the highest number of floors, and the world’s highest elevator installation. While you’re in Dubai, you just have to bring out the shopaholic in you. If you’re looking to buy some souvenirs, you can visit the Dubai Mall, the world’s second-largest mall, situated near the magnificent Burj Khalifa. Dubai is filled with countless shopping venues, so we’ve got you covered with our Dubai Shopping Guide. 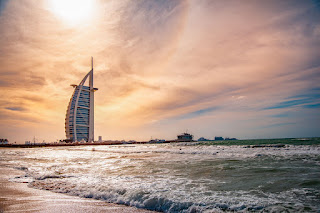 Burj Al Arab is the first loftiest skyscraper in Dubai and an icon of Dubai, nestled on its artificial island in Dubai’s harbour. Burj Al Arab, with its sailboat-shaped structure, draws visitors’ attention from all corners of the world, and it is widely known as a seven-star hotel. Amidst the city’s multiple alluring and marvellous skyscrapers, Burj Al Arab stands out for its reputation as the most lavish hotel globally. 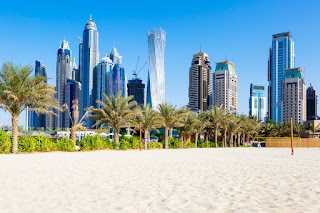 Princess Tower is the current second-tallest skyscraper, sits in the centre of Dubai Marina, one of the most sought-after localities in Dubai. The most noticeable feature of the building is the circular tip, shaped like a decorative domed crown. It was the tallest residential tower between 2012 – 2015 and offered breathtaking vistas of the Dubai eye and its beachfront. Princess Tower, Dubai Marina is located opposite the Dubai International Marina Club and just a walking distance away from a plethora of five-star hotels. Including The Westin Dubai Mina Seyahi, Le Meridien Mina Seyahi Beach Resort, and Dubai Marriott Harbour Hotel and Suites. 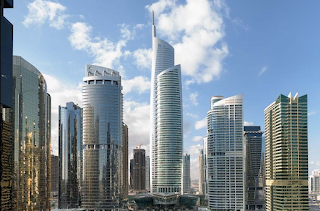 Almas Tower is the loftiest skyscraper and an iconic highlight of Jumeirah Lake Towers Complex, often referred to as Diamond Tower. Almas Tower has held the title of the tallest building globally before the completion of Burj Khalifa. The complex is located in close proximity to Dubai Marina, only 1.2 miles away. The largest diamond exchange centre features a three-story podium in the form of eight triangles inspired by the facets of a cut diamond. 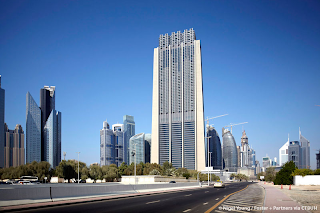 The Index is a 328 m tall, 80-story skyscraper in Dubai developed by Union Properties, and the project was initiated in 2005 and was delivered in 2010. This tower is one of the most distinctive structures visible through the viewing deck at Burj Khalifa. Due to its massive shape and the top spot between the other buildings on the Sheikh Zayed Road, it is almost directly facing the Burj Khalifa. The Index Tower is a multi-purpose building offering commercial offices and residential apartments. However, the tower offers easy access to the city’s most popular landmarks.

Dubai is the greatest tourist, commercial, economic and financial centre in the United Arab Emirates. However, the city is renowned for its modern skyscrapers, brimming with countless supertall skyscrapers. The number of these buildings is still fast-growing and may never stop. The tallest building in the city is the Burj Khalifa, and it is also the loftiest in the world at the same time. During your trip to Dubai, consider visiting these marvellous skyscrapers.