With the digitalization and growth of tech markets, the complexity of applications and games demands better infrastructure. It has posed challenges to the current methods and revised software and QA testing.

It is essential to create test automation for software testing. Mobile app test automation improves test correctness, expands testing coverage, and may even help with the load and concurrency testing. Furthermore, including automated software testing in the software development process might prevent defective releases from reaching your testers. By automating monotonous operations, testers may spend more time doing rewarding jobs like exploratory testing, which boosts the team’s morale. The most fundamental role of automated regression testing is to identify whether or not the code is functioning. Automated regression testing employs computer-based tools and methods to evaluate software after it has been updated with new code or features.

According to a survey, Enterprise Software is the market’s largest sector, with a forecast market volume of US$243.30 billion in 2022. 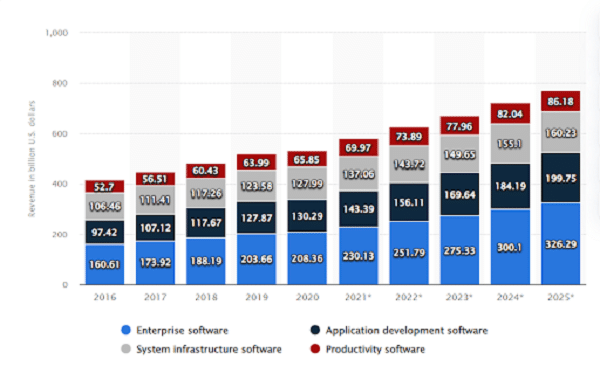 THE LEVELS OF SOFTWARE TESTING:

During the initial stages of testing, the program is subjected to evaluations that focus on individual units or components of the software. It observes whether they are functioning or not. The primary goal of this activity is to determine whether the application works as intended.

Individuals may use integration testing to merge all of the modules in software and test them as a group. This level of testing detects interface flaws between modules/functions. It is convenient since it defines how well the components work together. If they aren’t interconnected correctly, the software program’s functioning will suffer despite unit efficiency.

The initial level of testing is system testing, which involves testing the entire program as a whole. The purpose is to determine if the system has met all the criteria. And whether it fulfills the Quality Standards. System testing is executed by independent testers who were not involved in the program’s development. This testing is carried out in an environment that closely resembles production. System testing is critical because it ensures that the application fulfills the customer’s technical, functional, and business requirements.

Acceptance testing (or User Acceptance Testing) is the last step, and it determines if the system is ready for release. Modifications might be misconstructed in ways that do not fulfill the users’ intended demands during the software development life cycle. During this last step, the user will test the system to see whether the application fits their business requirements. After this procedure and the approval of the software, the production of the program begins.

As it is visible, the breadth of these tests is just another reason why bringing in software testing is critical. When a program is tested, flaws are discovered, resulting in higher-quality software.

With the premise set, the required automation for software testing is the issue.

WHAT TYPES OF TESTING CAN BE AUTOMATED?

Unit tests make up the majority of your automated tests. Unit tests are quick, dependable, and only test small pieces of code logic. Because automated unit tests are simple to design and easy to add to your continuous integration process, they make up most of your mobile app test automation.

These are executed on all sections that cannot be unit tested. These tests are far more complex to create, run much slower, and need a significant amount of code. Given the resources involved, it is crucial to decide which Integration tests to automate utilizing a prioritized automation backlog. Create an automated smoke test to add to your continuous integration workflow at the very least. A smoke test is a high-level, preliminary test that identifies flaws that are responsible for the rejection of software deployment.

Begin an automation backlog to identify additional integration tests to automate. Prioritize the things on your backlog. First, evaluate the monetary worth and concentrate on the goods with the highest return. Next, examine your software’s high-usage locations to identify which browsers need to be tested. Take note of the top two browsers, but concentrate on the first one. This is the first browser you’ll use for automation. Finally, go over your bug list to look for high-risk portions of the product that regularly fail. Contrast this with your backlog. If an issue has occurred several times and has the potential to reoccur, prioritize that backlog item. If difficulties relating to a browser continue to arise, bump that browser up in the queue. Once an automated integration test has shown to be stable, include it into your continuous integration workflow.

The Graphical User Interface (GUI) must also be automated to exercise all of the application’s functionality and pathways. GUI automation is cumbersome since it generally involves a large number of dependencies. Some system capabilities, for example, may need a complicated series of GUI actions to be followed. Because the GUI can vary dramatically between application versions, GUI tests can frequently fail. Hence this element of automation should account for a fraction of your automated software testing.

Present technology and innovations have drastically transformed our digital landscape. To help you cope with these time-efficiency challenges. Testing is necessary as it allows you to observe what the software does and how well it does it, allowing the business to assess the product’s quality before it goes live. QA testing guarantees that a company provides the best possible goods or services. Because QA attempts to offer consistent results through defined processes, businesses must also ensure that their methods for reaching the intended results meet particular quality norms.